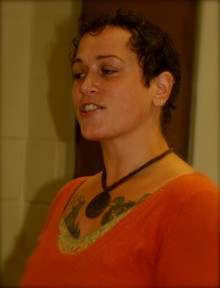 Maria Keane read “Briefly it enters, and briefly speaks…” by Jane Kenyon from The Boat of Quiet Hours (Graywolf Press, 1986).

Maggie Rowe read her poem “Night Birds Dip” from Every Mother Moves To A New Country, (Finishing Line Press, 2011) and read from the beginning of “In Blackwater Woods,” by Mary Oliver from American Primitive and also Oliver’s “Mornings At Blackwater” from Red Bird (2008).

Amanda Newell read her poem “On Amputation” and also “A Short Study of Catastrophe” by Jehanne Dubrow from Stateside (TriQuarterly, 2010).

Wendy Schermer read her poem “She Lost Touch With Herself” and also “In the Secular Night” by Margaret Atwood from Morning in the Burned House (Houghton Mifflin, 1995).

Lindsey Warren read her poem “Morningstar” as well as “Fleeing” by Nelly Sachs and “Born for the Snow” by Phillis Levin.

Nina Bennett read her poem “Born to Be Wild” from The Broadkill Review (issue 5, 2011) and “How to Get to My House,” by Joan Logghe from her newest collection, The Singing Bowl (Univ. of New Mexico Press, 2011).

Eleanor Morrow read “The Pedestrian Woman” by Robin Morgan from Cries of the Spirit: A Celebration of Women’s Spirituality, ed. by Marilyn Sewell, (Boston: Beacon Press, 1991).

We had readings from Karen Heyman, Darcy Mozer and a wonderful young poet from Newark High, Kemmie O.

I read “Waiting for Icarus” by Muriel Rukeyser from Breaking Open (Random House, 1973) and my poem “Limón Homage” on a painting by Sema Mellian, Homage to Rembrandt.