“An anthology that’s fresh and eclectic, and may actually represent a significant portion of the best new poetry being written.” —The Virginia Quarterly Review on Best New Poets.

The Best New Poets series consists of annual poetry anthologies, each containing fifty poems from poets without a previously-published collection. The first edition of the series appeared in 2005, and was published, as all later editions have been, by Samovar Press, and in 2006 the University of Virginia Press began distributing the anthology. –Wikipedia 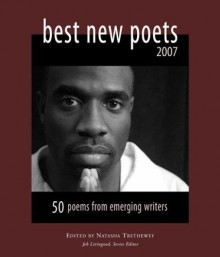